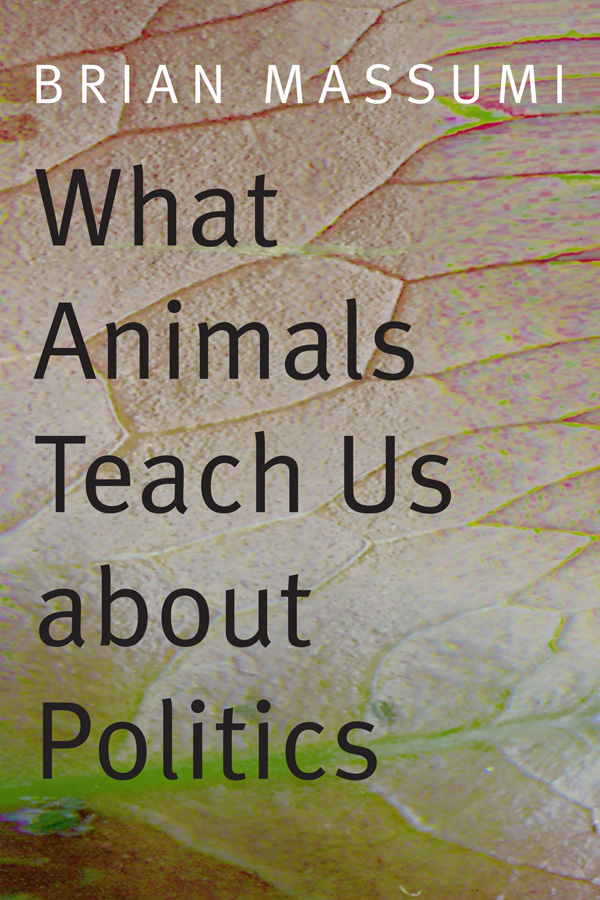 Duke University Press will be publishing two new books by Brian Massumi later this year, the first is titled What Animals Teach Us About Politics and the second is titled The Power at the End of the Economy. I recently finished compiling the index for the first book and will be doing the second one later this summer. Both are amazing pieces of philosophy that will be very welcomed additions to ongoing discussions on animal studies, the place of the human within the ecosphere, political power, and capital.

Massumi has been busy publishing book as of late. Prior to 2011’s Semblance and Event: Activist Philosophy and the Occurrent Arts, he had authored (or co-authored) just three books between 1992 and 2010. At the end of this year he will have added four more titles, with more on there way.

Here are the book description and endorsements for What Animals Teach Us about Politics:

In What Animals Teach Us about Politics, Brian Massumi takes up the question of “the animal.” By treating the human as animal, he develops a concept of an animal politics. His is not a human politics of the animal, but an integrally animal politics, freed from connotations of the “primitive” state of nature and the accompanying presuppositions about instinct permeating modern thought. Massumi integrates notions marginalized by the dominant currents in evolutionary biology, animal behavior, and philosophy—notions such as play, sympathy, and creativity—into the concept of nature. As he does so, his inquiry necessarily expands, encompassing not only animal behavior but also animal thought and its distance from, or proximity to, those capacities over which human animals claim a monopoly: language and reflexive consciousness. For Massumi, humans and animals exist on a continuum. Understanding that continuum, while accounting for difference, requires a new logic of “mutual inclusion.” Massumi finds the conceptual resources for this logic in the work of thinkers including Gregory Bateson, Henri Bergson, Gilbert Simondon, and Raymond Ruyer. This concise book intervenes in Deleuze studies, posthumanism, and animal studies, as well as areas of study as wide-ranging as affect theory, aesthetics, embodied cognition, political theory, process philosophy, the theory of play, and the thought of Alfred North Whitehead.

“This is a truly brilliant book, one of Brian Massumi’s best. More than anyone else I have read, Massumi makes real progress in untangling the relationship between play, sympathy, politics, and animality. What Animals Teach us About Politics provides a fascinating and persuasively non-subject-centered account of sympathy, and it goes a long way toward helping us to see how the practice and theorization of ‘politics’ would be radically refigured within a process-ontology.” — Jane Bennett, author of Vibrant Matter: A Political Ecology of Things

“In a remarkable work of speculative thought, Brian Massumi reimagines what politics can be when we ramify the importance of play—its excesses, surpluses, and transformative energies—and how it intimately binds human beings to other forms of life. This is not the ‘animal,’ and the ‘politics,’ you thought you knew.” — Cary Wolfe, author of Before the Law: Humans and Other Animals in a Biopolitical Frame